Let’s talk about where I live for a moment, shall we?  A few weeks ago I had my students brainstorm topics that I might mention when introducing Sichuan to those of you who haven’t had the privilege of being here in person.  Some of their ideas included pandas, spicy, mahjong, and mountains.  These are indeed some of the first things that I think of when I consider elements of the particular culture of Sichuan.  Other students got even more specific — and garnered laughs from classmates — by adding Sichuanese, the dialect (which is similar to, but noticeably different from, Mandarin.)

Allow me to add another element: laid-back. Casual would also be an appropriate term.

This is my second year living in Sichuan and, to be honest, a lot of my everyday life has come to feel pretty normal to me.  It was fun to have Laura visiting a couple of weeks ago and to get a glimpse of it through her eyes, a little bit of a throwback to my semester in Xiamen, when everything was new.  I’m used to seeing the intense games of mahjong that attract crowds, the street-washers that play It’s a Small World, the idea that it’s fairly safe for me to walk through a city alone at night, the small stray dogs everywhere (who know that they are way down on the totem pole and will run away if I look at them), how the metro system works, the guys casually napping on their motos. 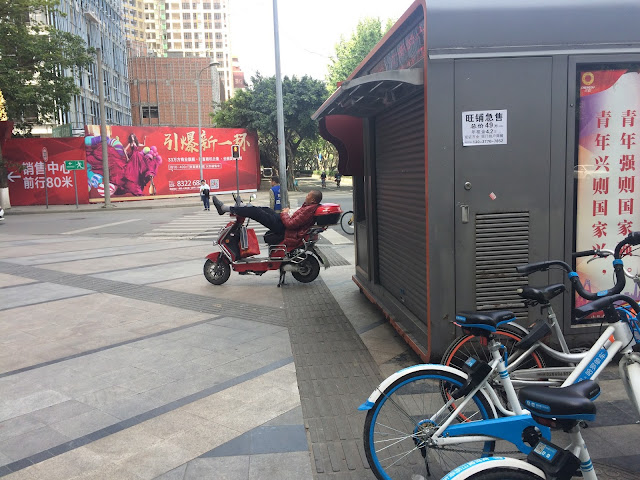 I’m used to how traffic works (I assume that the people driving aren’t psychopaths, they assume that I’m not suicidal, and we all go our merry ways), the rows (and piles) of bikes from various, color-coded bike-sharing programs, paying for things by scanning a QR code with my phone, and not freaking out when the directions lead me through a neighborhood that looks very reminiscent of a hutong (alley neighborhood) when I’m looking for Starbucks.

Maybe some of the wonder has worn off; mostly I’d say that a lot of the exhaustion has subsided.  I’m still amazed every time I think, Wow, I live here.  I’m not done noticing, but I am a little bit harder to surprise.

Or so I tend to think.

Today, I was walking back to the hostel from Starbucks and hoping that my route would be a little bit more straightforward than the one I took earlier in the day.  As I walked past a series of small shops, I became aware of a smell.  Much of life in China seems to be composed of (often strong) smells, so that was nothing new, but this was different.  It smelled like smoke.  Not the normal kind of smoke smell that comes from someone cooking with a lot of oil at a high heat, but an acrid, something-burning-that-shouldn’t-be type of smoke.  I registered this fact with a little bit of curiosity and kept walking.

And then the firetrucks came driving down the road, parking right in front of where I was walking.  About the same time I realized that there was a large crowd of people gathered on the other side of the street.  So I crossed the street to join them.

Once I was on the other side of the street, I could see that there was smoke wafting out of the five story building (the shops comprising the first floor.)  A sizable crowd of us stood there watching and taking pictures (casually) and the firetrucks sat there for a few minutes before they started running the water.  None of that seems too crazy, you say?  Hang on to that thought. 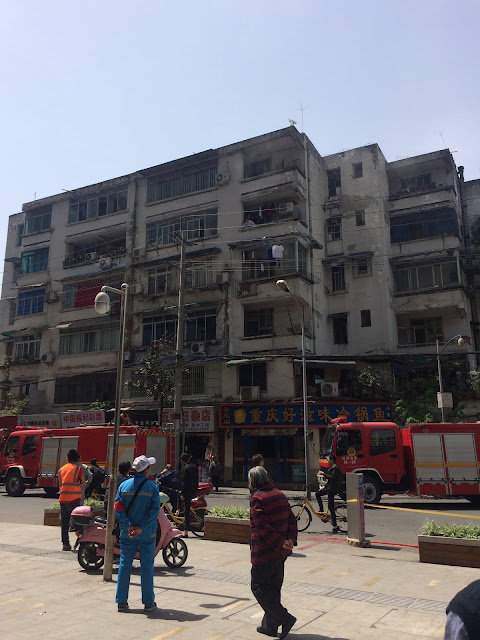 Here’s the part that got me: the people in the building.  Remember how I didn’t immediately wonder if the smoke was coming from that building?  There were still shopkeepers doing business.

Also (and this… this is just… pure Sichuan…) there were a couple of people casually leaning out the fourth floor windows to watch the show.  Of the smoke.  Wafting out of the building below them. 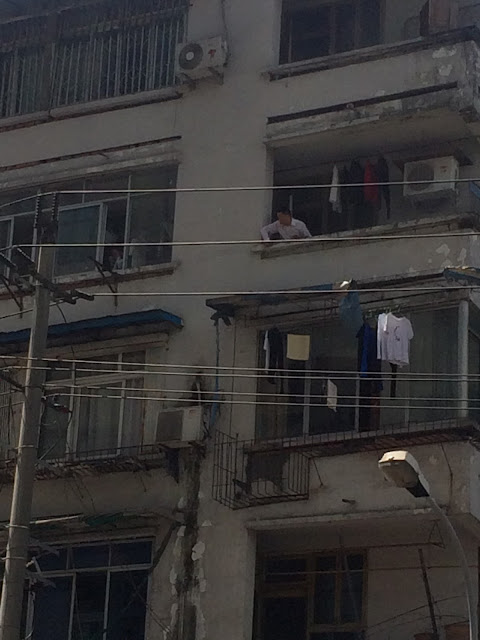 They were also casually coughing, thanks to leaning directly into the aforementioned smoke…

When in Rome, right?  So like the rest of the crowd, I stood there and watched for a while, but then got bored and continued with my walk.  (To my surprise, no one in the crowd was eating -- or selling -- peanuts or sunflower seeds.)

I really do think this is one of the most China — and specifically, Sichuan — things that I’ve ever witnessed.  The level of laid-backness was way beyond anything that I could have imagined before this afternoon.
China daily life journaling pictures random