Showing posts from October, 2013
Show all

October 26, 2013
I met Amy during our first week at college, on a bus trip heading into Pittsburgh.  I got to know her better later because we had a lot of mutual friends. I met Tyler during our junior year, I think; we were going on the same trip to Aliquippa.  He and Amy were maybe interested in each other and Amy asked me to keep an eye on him during the week and let her know what I thought of him. I was impressed. Today I went to their wedding.  It must have been nearly a year ago when Tyler sent me a message on facebook, asking if I expected to be back in America in October 2013.  Up until that point, I didn't think I had much committing me one way or another.  But I said yes.  I really wanted to be at their wedding. When I think about either of them, my mind fills with memories -- evenings with Amy in Schoolhouse, talking about life; drives with Tyler around Aliquippa, too many quotes to record, having hot soup slosh all over me and wearing his spare rain pants for the evening. There was a de
Post a Comment
Read more

October 21, 2013
Today I got an email from friends who live in Changchun, asking that we remember the city (and the people who live there) because the air pollution levels are extremely high right now.  It's over 400 on a scale that goes up to 500... the current level is called "very hazardous," and they said it's the worst they've seen in the ten years they have lived in Changchun. I can imagine to some degree.  There were a couple of days last year that it was just nasty, but nothing as bad as what they have right now.  It's gross to go outside and you think what am I breathing?  GAK! Not too long later, I got a message from a dear friend who's a student at Huaqiao, telling me about how her birthday had been.  The last message she sent read:  "It's been foggy all day and it's beautiful." Yes, the pollution needs to be cleaned up.  A lot of life is like that... filled with real problems that pose real dangers.  But often the solutions are not going to co
Post a Comment
Read more

Some thoughts on contentment. 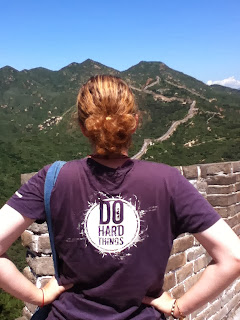 I have learned in whatever situation I am to be content, wrote Paul. I have not. I was thinking about this last week because I was feeling really dis content.  I have a job, but I don't have enough hours yet to be making much money.  Also, let's face it: somehow making sandwiches at Panera is a little less glamorous than teaching at a university in China.  It doesn't exactly have the same ring of I'm doing awesome things  when I tell people what my job is. I like people thinking that I'm doing awesome things!  I enjoy feeling that my life is an adventure.  And while  a bus ride to find cheese in China seems like an undertaking worthy of epic theme music, a bus ride in Ohio usually seems like a nuisance. See what I mean?  I haven't learned to be content very well. But at some point last week, when all of this was sort of bubbling around in my head, it occurred to me that I was being ridiculous. I don't have to deal with the daily frustration of not being able
2 comments
Read more

October 03, 2013
So, last year in China, I really wanted pumpkin.  Pumpkin anything.  Pumpkin muffins, pumpkin bread, pumpkin pancakes. The difficulty was that (as far as I could find) Changchun is not exactly full of cans of pumpkin waiting to be used.  Solution: I bought a small pumpkin, hacked it open with one of my multiple cleaver style knives, baked it like crazy and smashed it up into glorious pumpkin puree. This was a fairly easy and relatively painless process (i.e. I did not drop the pumpkin on my toe or put my hand in the way of the large knife.)  So this year, I said, "Hey!  Let's get a pumpkin!  I want to make pumpkin things." We got a pumpkin. It sat on the counter for... um... three weeks?  Something like that. Please understand, this is not because I lost interest in turning it into pumpkin puree.  I had just underestimated the importance of the tool that I used last year.  Somehow, the paring knife just... wasn't cutting it.  I tried stabbing it and the knife sort of
Post a Comment
Read more
More posts