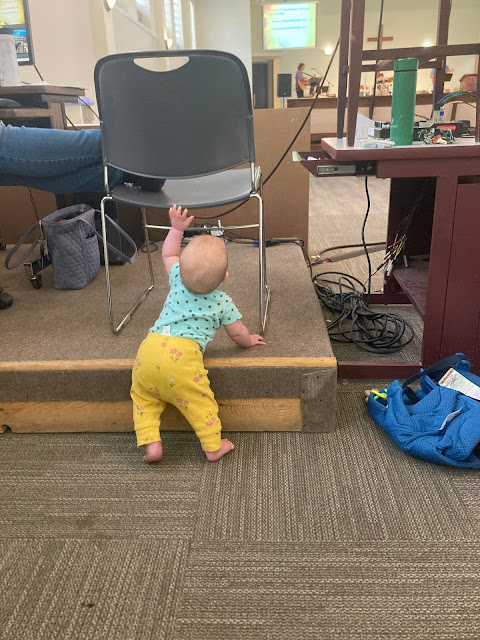 Last night I told Jason, "I feel like I have a parenting secret." No, the Bean doesn't sleep through the night.  Some nights she sleeps longer in her crib than others, but she always wakes up after a few hours and cries for me, wanting me to pick her up and feed her.  And then she doesn't want to be set back down in her crib; she wails like a little door alarm if I try to settle her back in the crib. So I don't -- I snuggle her close and we both go back to sleep. And while, some nights, I still want to sleep on my stomach and have blood circulating to my arm, mostly I love it.  I'll be a little sad when she doesn't want to spend every night cuddled up against me. She's seven months old going on about one and a half, full of confident tenacity and big opinions.  She's easily delighted -- cheerios, her sippy cup, a bookshelf, successfully pulling herself to stand, hearing her name, seeing a familiar face coming in when we arrive to get her from her n
Post a Comment
Read more

Sleep Regression and the Patience of God 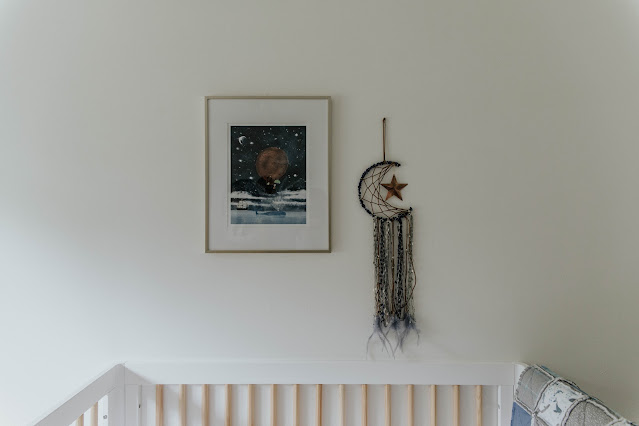 Well, it's been a quiet season on the blog, although not so much in our lives -- my days are full of caring for a small person and her growing personality, and there's all the regular running of a household and being part of a church community and celebrating holidays with friends and family even as we grieve the losses brought by the past year. My head is bursting with words and thoughts, but my fingers are a bit out of the habit of writing.  So maybe it's time to get back into it.   I had no idea that having a child would lead me to think so much about theology, but my goodness, it does.  Loving Isabel is totally different than love that I've experienced before, even though other relationships have held hints of what this type of love is like.  I loved my students; I've loved friends' kids, but it is not the same.  None of those relationships demanded, day after day (and night after night), that I give it my attention, time and energy.  None of the people in t
Post a Comment
Read more

I've been listening to Taylor Leonhart's lovely new album, Hold Still , on repeat.  (You should definitely avail yourself of the pleasure!) Belly of a Whale particularly captured my heart.   ...but You cannot resist Your tendency to save me from myself... ...but You cannot resist Your habit of forgetting how I fail... These lines struck me as a gentler, less cynically ironic rendition of some of my favorite words that the prophet Jonah spoke: "I knew  that You are a gracious and compassionate God, slow to become angry, rich in faithful love, and One who relents from sending disaster."   They also reminded me of the words that we pray each week in my church: "You are the same Lord whose character is always to have mercy." What a remarkable truth.  There are times when, like Jonah, I find myself wishing that God wasn't quite so  merciful, because it is not my nature to always have mercy.  It's my character to run out of patience and graciousness, to wa
1 comment
Read more 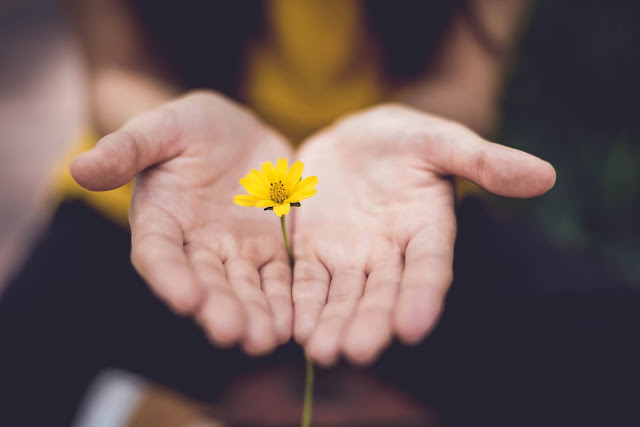 I know, I know, we're not really anywhere near the actual season of Advent yet. (Photo by Lina Trochez on Unsplash ) But Kicky is 39 weeks old today, which means that she is abundantly welcome to show her face any time.  And I've been thinking about Advent.  Thinking about how eager I am to meet someone who I haven't seen yet.  Thinking about the wildness of trying to count down to something that I don't know the exact time for -- just "soon."  Thinking about how hard I'm working to keep short accounts, because I don't want things in a mess when she does show up. Though you have not seen Him, you love Him; though not seeing Him now, you believe in Him, and you rejoice with inexpressible and glorious joy... (1 Peter 1:8) He who testifies about these things says, "Yes, I am coming soon." Amen!  Come, Lord Jesus! (Revelation 22:20) Pay careful attention, then, to how you live -- not as unwise people but as wise -- making the most of the time, b
1 comment
Read more 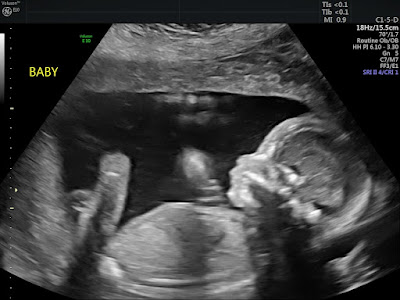 John 15 begins with the famous "remain in Me" passage, where Jesus compares His relationship with His disciples to that of a vine and branches.   What it means to "remain" or "abide" is a topic that I've heard a lot of teaching about -- how branches exist and can bear fruit because they're connected to the vine, etc.  To be honest, most of it has seemed kind of obvious or not particularly memorable.   But this summer it's come home to me in a new way, courtesy of our daughter (currently called Kicky, due around the end of September). She abides.  Her life depends utterly on my life.  She eats and sleeps, gets hiccups and dreams, all in the context of being connected to me.  She may kick and flail at times, but she's not going anywhere that I'm not going. I don't think she stresses about if she's spending enough time with me, or if she's growing at the expected rate, or if she's making me proud.  She doesn't have to.
Post a Comment
Read more 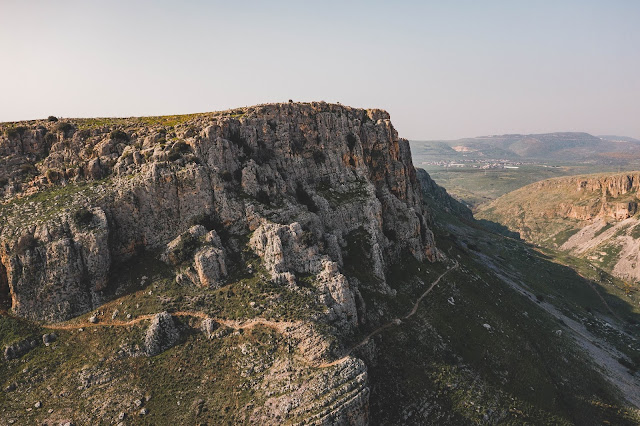 I had trouble sleeping last night -- maybe it was something I ate. (More likely it had something to do with the long nap I took after we got home from church.) It's a rare thing that I'm in a good mood or headspace when awake for a lot of the night, and last night was no exception -- my mind and heart were both whirling around the topic of abusive church leaders, and the devastation and shame that they bring.  (Photo by  Dave Herring  on  Unsplash ) There's no shortage of examples in the news, although Ravi Zacharias is probably the most recent big one.  Hitting closer to home is the ongoing conflict in the church that I was in before I moved to China.  Although I've caught only the edges of it, it's been sickening and heartbreaking and infuriating.   So this morning, the reading for Pray As You Go was from Luke 4 -- the passage where Jesus stands up in the synagogue in His hometown, reads the passage from Isaiah, and proclaims that its fulfillment has come.  And
1 comment
Read more 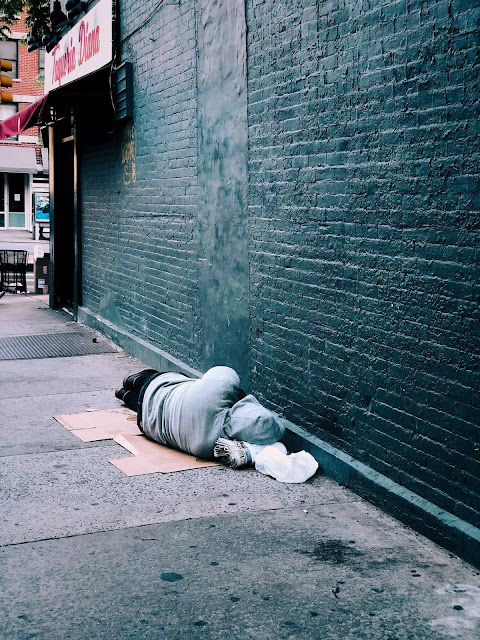 (Photo by Jon Tyson on Unsplash ) What were you going to do, run away? Your friends were bound and determined to carry you to the itinerant preacher; Never mind the time they had to take off work or the crowded traffic of Capernaum or that there really wasn’t space for them. No, they were going to get you to Him if they had to carry you the whole way drag you up onto a roof and dismantle someone else’s house. And then, there you were: all eyes on you, the interruption. But He didn’t leave you hanging, an impersonal prop in an object lesson,   a convenient sermon illustration. He didn’t ask if you believed, if you wanted to be healed, to tell the truth, the whole truth , and nothing but the truth,   so help you God. He looked at your friends with that twinkling light of an acknowledging smile rising in His dark eyes and nodded, like He had heard their desperate prayers, and labored breathing, and swallowed curses as they wrestle
Post a Comment
Read more
More posts