November 14, 2017
Towards the middle of the semester, days are so full that I feel a little stunned at the end of the week as I walk out of my Friday class. What?  Friday again?

It's good stuff though.

Yesterday evening we were able to have a birthday party for Marceline.  While the chance to celebrate a student's birthday with them is always special, this one was noteworthy for a few reasons.  Let me break it down... It was her 19th birthday and first-ever party.  To have the chance to spend some time telling (and showing) students that we are thankful for their lives and presence is such a sweet opportunity. 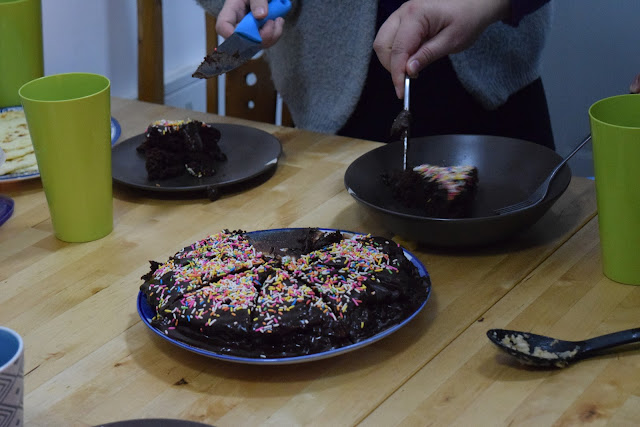 Also, this party was for Marceline.  As one of Miriam's students last spring, she started coming regularly to our office and.  Well.  We described her at the time as a cactus that chases you around begging for a hug and then, when you try to oblige, pokes you and leaves you wondering what on earth just happened.  I don't think that Miriam or I could have even imagined that, nine months later, we'd be friends and genuinely enjoy hanging out with her.  We hoped for it, but we couldn't really picture it. 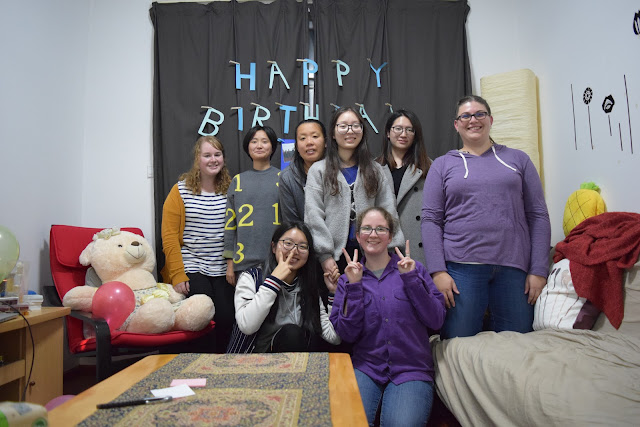 Then today was full.

• two classes (both excellent -- for purely selfish reasons, I'm hoping that I get to keep all my classes for the full year)
• a couple of hours to check the internet, eat lunch, do the next section of the Romans study for tomorrow
• an hour in the office (thankfully quiet, allowing me to get some grading done!)
• some time helping students who want to go on to graduate studies in France prepare for their interviews (which will be in English...)
• dinner with Miriam and three of our students from last year (lots of laughter and some delicious food at one of our favorite restaurants on campus)
• quick stop in my apartment to grab my external battery pack because my phone was about to die
• speech competition!  This was fun and hectic because it was my job to ask all ten contestants a question about their speech and then to give everyone there a speech with some encouragement and some suggestions for improvements.

HIGHLIGHTS! (And if you read that as a reference to Hamilton, well done.)
• I was calling the contestants out on not thinking very deeply (and hence struggling to answer questions) and I glanced over at a mob of my students sitting together and said, “As my students can tell you, I always ask WHY,” and my students all cracked up.  My work here is... well, maybe not complete, but well underway.
• The only student who had the presence of mind to check if he had comprehended my question was.... my own.  (And in a non-highlight, he quoted G. K. Chesterton and said that he was an "American scientist."  I don't know if he just made that up on the spot or what... but I think we're going to be talking about that.)
• Their topic had to do with the 19th political convention in Beijing that just finished up, and their speeches were excessively vague and non-concrete.  So in my comments to them, I told them, “Look, it doesn’t make any sense to say, ‘I don’t know what the final destination of the New Era is, but let’s go there together.’”....my dean may have been cracking up, which is about the best reaction that I can hope for.

Basically I like making people laugh.  And think.  Both of those are good.
China daily life journaling pictures relationships