February 28, 2017
I’ve mentioned before how the gate guards and I attempt to make up for our mutual lack of understanding in each other’s language by pouring on the volume.  It’s very amiable and I really get a lot of enjoyment from it (which is one thing that makes me question how I’d do long term in Laos.)  Recently, as I left our complex to go to the store, we had our most memorable yelling interaction to date.

Background: when I started at Geneva, all of the Dag people were talking about Firefly.  All the time.  And asking me if I had seen it.  All the time.  My answer, as it is with most TV shows, was no.  Then the guys from the Greek class started asking me if I had seen Firefly.  Since I spent a lot of time with them, they decided to remedy my ignorance by showing me some episodes.  It’s cowboys in space, has a great theme song, a little terribly mispronounced Chinese, and loads of snark.  I fell in love.

My mom is a knitter.  So at some point in the last year or so, it came up that I would really love a Jayne hat.  Jayne’s hat is one of the most iconic things from the show (I think) and the nerd equivalent of wearing a Steelers t-shirt around.  It helps you find people in the fandom.  Also, it keeps your ears warm. 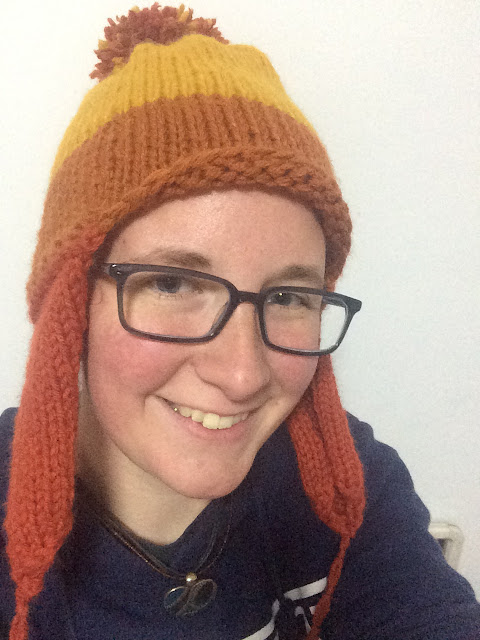 My mother, being a sweet person who often goes out of her way to engage in things her kids are interested in, agreed to make me a Jayne hat.  She did more research into various patterns than I had the patience to, and shortly before Christmas, a box for me arrived in DJY.

(Disclaimer: for those of you who are planning to contact my mom about getting a similar hat ASAP, she dislocated her shoulder in the fall and hasn’t done much knitting since.  I’m sorry.  She’s sorry too, but maybe for different reasons.)

It was cold outside, so I grabbed my hat and went strolling down the street towards the store.  From the opposite end of the street, one of the guards began walking towards me.  As we got closer to each other, he burst into one of the most genuine belly laughs I’ve heard, probably ever, from a Chinese man.  He continued guffawing (and I’m pretty sure that I was grinning like the Cheshire Cat; amusement is contagious) and managed to YELL through his laughter at me — and at this point we were quite, quite close — “你的帽子很漂亮!”  YOUR HAT IS VERY GOOD LOOKING!

So, you know.  Maybe he’s a fellow Firefly fan.

I’m pretty sure it made his day — and it definitely made mine.