I do not want to say anything at all. What can be said that is not simply more noise? More often than not, I resonate with Hamilton’s Aaron Burr:
“I’m willing to wait for it
I am the one thing in life I can control
I’m not falling behind or running late
I’m not standing still
I am lying in wait.”

This week, at conference, we’ve been studying Esther.  Mordecai’s words never cease to haunt:
“For if you keep silent at this time, relief and deliverance will rise…from another place, but you and your father’s house will perish. And who knows whether you have not come to the kingdom for such a time as this?”

When I first hear about President Trump’s refugee ban, I am sitting in a session, listening to an update from the Middle East region team.

My friend Noah — who I just spent two weeks sitting in class with, learning from, laughing and working with — posts this. 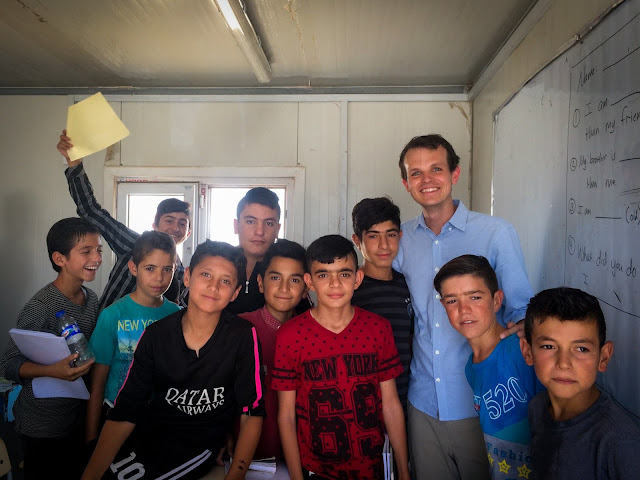 To President Trump and his supporters,
These were my students for just one short month in Iraq and yesterday you sent a message to them that you do not care that their entire lives were ripped from them. You have made sure the most powerful nation on earth will turn its back on the people most in need of help and there is no justification. You sowed fear and intentionally mislead and history will look back and question how a nation that prides itself on justice could turn a blind eye to the genocide of so many people. I speak up because I still believe in an America that is kind and compassionate and does not let fear rule its mind. I speak up because I believe in an America that still welcomes those in need. I speak up because the refugees can not.

So what now? As followers of Christ, what do we do? If we take seriously the themes of Scripture that remind us that “we are strangers before [God] and sojourners, as all our fathers were” (1 Chronicles 29:15) and that we therefore have a responsibility to care for strangers and sojourners, for the fatherless and widowed and oppressed and naked and hungry and impoverished and unheard and abused and persecuted and cast out and unwanted and untouchable, what do we do?


Since, then, we know what it is to fear the Lord, we try to persuade others. What we are is plain to God, and I hope it is also plain to your conscience.  We are not trying to commend ourselves to you again, but are giving you an opportunity to take pride in us, so that you can answer those who take pride in what is seen rather than in what is in the heart.  If we are “out of our mind,” as some say, it is for God; if we are in our right mind, it is for you.  For Christ’s love compels us, because we are convinced that One died for all, and therefore all died.  And He died for all, that those who live should no longer live for themselves but for Him who died for them and was raised again. So from now on we regard no one from a worldly point of view. Though we once regarded Christ in this way, we do so no longer. Therefore, if anyone is in Christ, the new creation has come: The old has gone, the new is here!  All this is from God, who reconciled us to Himself through Christ and gave us the ministry of reconciliation: that God was reconciling the world to Himself in Christ, not counting people’s sins against them. And He has committed to us the message of reconciliation.  We are therefore Christ’s ambassadors, as though God were making His appeal through us. We implore you on Christ’s behalf: Be reconciled to God.  God made him who had no sin to be sin for us, so that in Him we might become the righteousness of God. (2 Corinthians 5:11-21)

You know what ambassadors do? They go.

You know what Christ did? He came. He left heaven and came to earth and humbled Himself to become a man and to live in our world and to die.

(Maybe — and I pray that it is so — maybe President Trump’s heart will be changed. I remember how God worked through Pharaoh, through Nebuchadnezzar, through Cyrus, and I think of how beautiful and glorious it would be if a man who has been so publicly foolish became publicly a follower of Christ committed to justice and mercy. I hope and pray for this, but that is not my work to do, not within my responsibility or abilities to bring it to pass, and I cannot simply smile and wait while image bearers of God are treated like nuclear waste.)

You know what we do if refugees cannot come? We go.
Bible China daily life journaling pictures quotes relationships