Dose of daily entertainment, courtesy of the DJY bus

October 30, 2016
The bus ride to Dujiangyan on Saturday morning was easily one of the most epic (and hilarious) rides that I've been on in China.

It started off pretty normally.  Chilly (but sunny!!) morning, a bus filling with loud people and two sleepy foreigners.  Two men got on at successive stops, one older and one middle-aged.  They clearly knew each other and were joking around, with the middle-aged man bouncing over to the older when he saw him and rubbing his head so violently that his hat nearly fell off.  Already I liked them.

As we rolled along the highway, the middle-aged dude realized that part of the reason that the bus was a frigid wind tunnel was because his window was open.  He closed it, and looked at the guy sitting across the aisle from him, whose window was also open.  Slide the window closed, he gestured, it's cold.

And so it began. 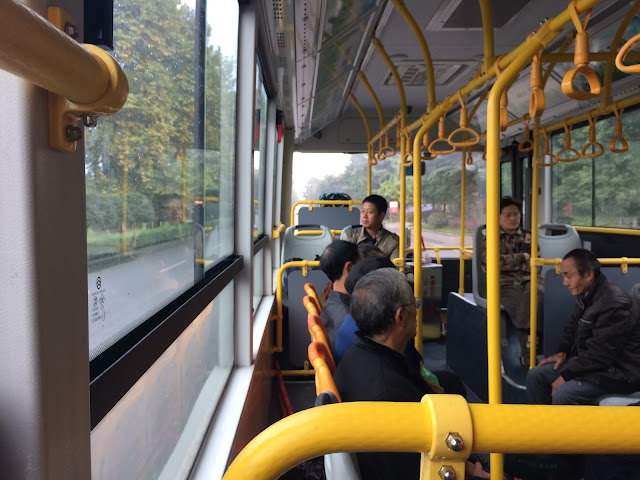 Periodically, for the next forty-five minutes or so, the middle-aged guy (Mr. Camo Jacket) gesturing to Mr. Window Man to CLOSE THE WINDOW.  Mr. Window Man would ignore him (I'm sure you can see which one he is...) and Mr. Camo Jacket would cross his arms and hunker down into a sad ball of shivering.  When he was sure that Mr. Window Man wasn't looking, he'd make "I'm going to fight you" gestures, to the amusement of his old friend and the rest of the bus.

Or to the amusement of me and Miriam, at least.

The whole thing made me think of a friend (David?)'s description long ago of the battle in the Lord of the Rings movies between Gandalf and Saruman.  "It's the battle of old men with sticks!  Telekinetic sticks!"

There were no telekinetic sticks involved, but it still made for a good show.
China daily life pictures random