December 11, 2015
Although my reading of Theodore Rex did not go according to plans, thanks to new friends experiencing Greyhound with me, I did finish the massive volume.

I knew it was going to be a great read when I was reaching for a dictionary within the first few pages. Catafalque was not a word that I knew.  Now it is.  I love learning new words in English.

The entire book was like that -- leaving me wondering about new thought and concepts that I hadn't quite put together before.  I appreciate that it did not gloss over some of TR's serious flaws as a man and as a president, particularly in how he handled civil rights of African Americans. 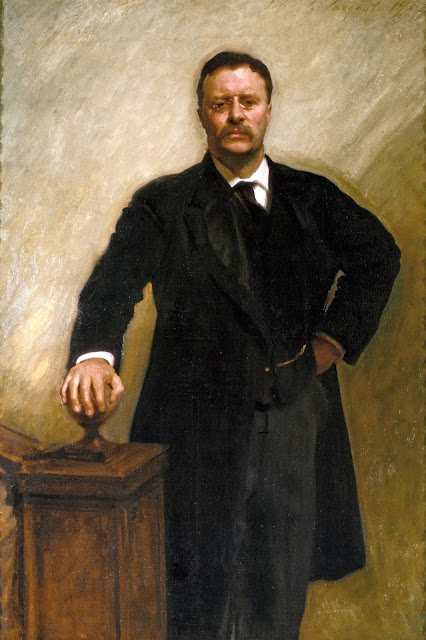 Here were a few things that really struck me.

TR made extensive use of his presidential powers.  I feel like we get pretty bent out of shape when a president now uses his powers to push his own agenda, but it's nothing new.  TR was doing it all over the place -- whether to conserve forests or to help prevent war with Germany or to have the canal going through Panama.  The man was a master politician and gamed the system and took advantage of an awful lot of loopholes.

It wasn't really all that long ago that he was president.  Subpoint:  America is really not that old.  TR's presidency feels not too distant to me because my great-grandmother told me about when McKinley was assassinated and TR became president.  (Her mother got them out of bed with the promise of a "surprise."  She and her sister were not amused when they discovered what the surprise was.  They didn't care.  They thought it was going to be something special to eat for breakfast.)  What really caught me by surprise was when, in reference to Edith Roosevelt redecorating the White House, there was the statement that it would have looked familiar to those who remembered how it had looked during Monroe's administration.

DURING MONROE'S ADMINISTRATION.  There were people alive during TR's presidency who had also been around during Monroe's presidency, which in my mind is basically the beginning of the country, which means that I'm basically only two living memory gaps away from the founding of America.

It was fascinating to see the parallel issues between TR's time and ours.  The world was not globalized to the same extent then as it is now, but there were already issues of international relations blowing up all over the place.  And the US was connected in ways that it never had been before -- geographically, by the railroads, and in communications.

There were a few wars that TR was very successful in averting, whether between the US and a foreign power or as a mediator between other countries -- and reading about his diplomacy and measures in doing so made me wonder if the current American obsession with transparency is not entirely a good thing.  Sure, politicians and the very powerful need to be accountable -- but there are some issues that it is not at all helpful for the general public to express opinions about or to be involved with in any way while they're happening.  The government does have a job to govern.  If I wanted that job, I should run for office.  If they want to tell me how to make their latte, they'd better become a barista.

Finally, I was really impressed by his integrity in laying down the role of president.  TR enjoyed vast popularity and had to be firm about the fact that he was not going to seek a second elected term, but was counting the time that he served after McKinley was assassinated as his first term.