Showing posts from May, 2015
Show all

Goodbyes as a Grace

May 31, 2015
Living in a university town means saying a lot of goodbyes.  I'm thinking about that particularly today because it was a goodbye Sunday at church as a couple prepares to move to Texas on Wednesday.  There were lots of prayers and tears and hugs and stories and laughter and some more tears, because they have loved well and are deeply loved.  While we rejoice at the way that God has opened the doors for them to move, we are deeply saddened at losing them. Goodbyes are hard.  I hate the abruptness, how someone who was gradually woven into the pattern of my life is suddenly yanked out.  If it were up to me, I'd probably design the world to run so that everyone I loved would live in the couple of square miles around me, so that we wouldn't have to say goodbyes, wouldn't have to face that pain. That sounds great, right? But the more I think about it, the more I realize that it would not  be great.  At least not now, not as the world currently is.  Because what motivates
Post a Comment
Read more 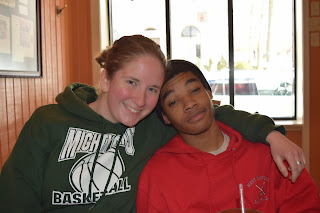 Orphans or adopted sons and daughters? That question has been a motif in my Wednesday night small group as we discuss the gospel and its implications in our lives.  Do we truly believe and live as though we are what Scripture authoritatively declares us to be -- the adopted children of God?  Or do we instead live from a defensive position of trying to justify ourselves, not really  willing to fully trust that God really  loves us and will never abandon us, never sigh and shake His head and give up on us when we mess up one time too many? (I'm so grateful to my family for teaching me about adoption in practical, not just theoretical ways!) It's a question that strikes close to home for me, because adoption (and issues surrounding it) is a language that I'm fluent in.  I know all about what it means for someone to be adopted.  I know all about what it's like when a child, despite their legal and social standing as truly a member of the family, refuses to trust it
Post a Comment
Read more 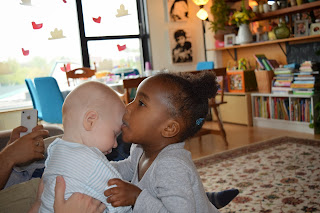 Media vita in morte sumus , that's the line that's famous.   In the midst of life we are in death. But a week and a half ago, I felt more the opposite tension of that.  In the midst of death, we are in life. That Tuesday came the terrible, unexpected news of Nick's death, and the funeral was Friday morning. On Saturday afternoon, I was at a birthday party for an almost five year old.  To tell the truth, I felt not much, mostly numb, still in shock, still too overloaded with unprocessed emotions to have really noticed or cared that it was raining as I walked across town or that the flowers were blooming all over the place in profuse beauty. And still -- Still I was glad to be there.  Glad to be with people who were celebrating life, after a week that was full of mourning with people grieving death.  Glad for the bright cheer of little kids who babble with each other in gibberish and burst out laughing over nothing at all.  Who hand out hugs without a second thought.
Post a Comment
Read more
More posts