April 10, 2015
As my Community Bible Study group comes to the end of the semester spent in Revelation, we go back to the beginning, stepping back to make sure that we haven't lost sight of the forest for the trees.

And the view is astounding.  Seeing the whole again after taking time to look at the parts, it's easier to see some of the connections and depth and richness of how the whole book is interwoven. 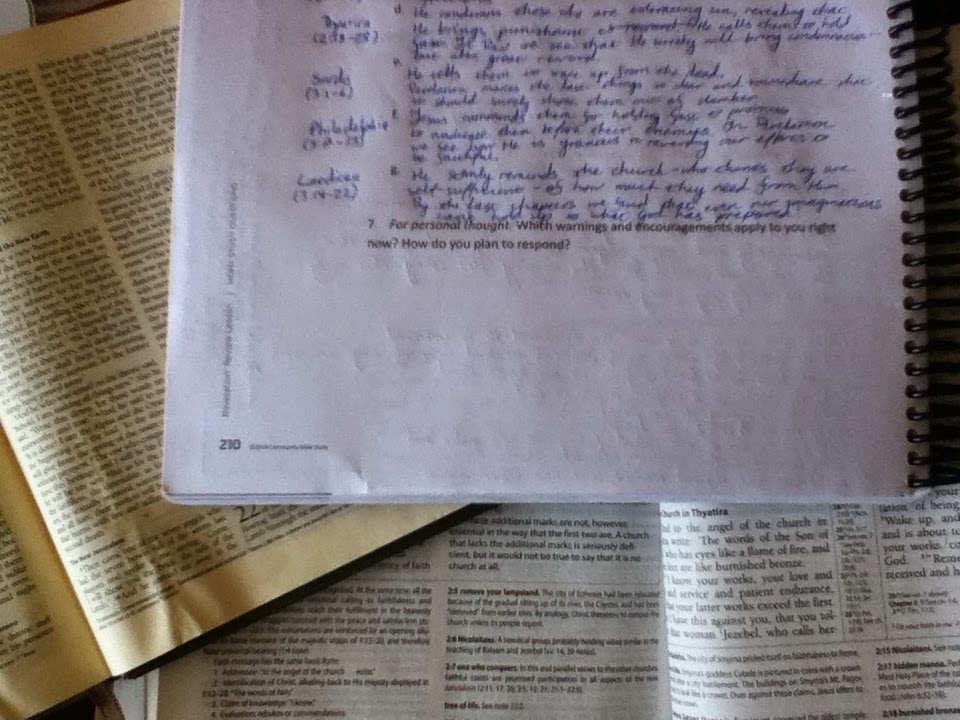 I've been especially struck by the messages to the seven churches in Revelation 2 and 3, and how the rest of the book ties into them.  The blessings and warnings are all fleshed out, given more detail -- and there is great encouragement in seeing how the later chapters of Revelation equip believers to obey the commands that Jesus gives to the churches.

The warnings given to the churches still carry relevance for us today, as churches and as individual Christians as we struggle with the same temptations to tolerate sin, to slide away from faith, or to give up under the huge pressures of life in a world that hates Christ.

Jesus says that the Ephesian church has abandoned their first love.  Throughout Revelation they get to see Him in His glory, the eternal Bridegroom who died for, fights for, and wins His bride.  They have much to endure, but their love for Christ can -- and should -- be rekindled through the vision that Revelation provides.

The church in Smyrna receives only commendation from Jesus, along with an admonition not to fear death.  Although Revelation does not gloss over how terrible the end will be, Jesus uses the book of Revelation to provide assurance to believers that all of the events of the end times are in His hand.  They can know for certain that death is a vanquished enemy.

Jesus tells this church to repent from tolerating sin such as idolatry and sexual immorality, or he will come soon and wage war against them with the sword of His mouth.  As they see Him in his role as Protector of His people and Conqueror of His enemies, their hearts should be moved to put their sins to death and firmly ally themselves with this mighty King.  They have the opportunity, throughout the rest of Revelation, to be reminded of how powerful the Word is -- the same word that has been planted in them, which is able to save their souls, and should motivate them to put off sin.  (James 1:21)  Throughout Revelation, it's also clear that those who believe in Him should long eagerly for Him to come soon!  While the promise of His coming should strike terror into the hearts of those who continue in sin, Paul tells Timothy,


Now there is in store for me the crown of righteousness, which the Lord, the righteous Judge, will award to me on that day—and not only to me, but also to all who have longed for his appearing. (2 Tim 4:8)

Similar with the church at Pergamum, Jesus condemns those who are tolerating sin, reminding them that he will bring punishment.  Throughout the book, they find that He also brings great reward for thos who faithfully hold fast.  (Rev 22:14)

Jesus tells the church at Sardis to wake up from the dead, to rouse themselves before it is too late.  The rest of the book lays out what is going to happen so clearly and vividly and immediately that it should surely shock them out of slumber.

Jesus commends this church for holding fast under persecution.  He promises to vindicate them before their enemies, reminding them of His deep love for them, and that He will richly reward their faithfulness.  Revelation as a whole reinforces the truth that God is gracious and generous in rewarding their efforts to be faithful, even if they have only a little strength.

The church at Laodicea is sternly, sharply rebuked by Jesus for their apathetic delusion of self-sufficiency.  Revelation makes it quite clear that they will not be able to handle the tribulations coming on their own and that they will be revealed to be weak and finite, desperately fragile in their mortality and despicable in their sinful rebellion against God.  It uses vivid language to remind them how they utterly depend on God.  And the last chapters show them that their imaginations can't even hold up to understanding the glories that God has prepared.

I was a bit tentative about the thought of doing Revelation in an interdenominational study, because it sort of seemed like asking for trouble.  But I am now so thankful for it, because it has motivated me to put off sin and to look forward with more eagerness to Christ's coming.

In conclusion, there are a couple of songs that have been going through my mind over and over as I studied Revelation, so I wanted to share them.  :)

Revelator by Josh Garrels.  Click here for the lyrics and to listen to it.

Your Beloved is Ready by Nathan Partain.  Click here for lyrics and here to listen.