Of Prayers and Providence

April 26, 2014
On many topics, my prayers are vague.  When it comes to mind, I may ask for God's protection that day.  If it occurs to me, at the end of the day, I may thank Him for keeping me safe.  But unless I'm doing something like wandering around Cleveland at night looking for a bus station, or traveling on roads that are icy and being blizzard-ed upon, I generally don't really think too much about God's providence in regards to my safety.

Yesterday morning, I did.

Yesterday morning I was scheduled to start my shift at Panera at 8 am.  This starting time always leads to me rejoicing, because it means that I can catch a bus at a stop that's quite close to the apartment rather than my normal one, which is a bit of a hike.

A little before 7:20, I headed out of the apartment and went to cross the road to get to the bus stop, and noticed that there was a police car and two civilian cars pulled over there... right in front of my bus stop!  I hope I'm not going to get in trouble for jaywalking, I thought, not sure that I'd have time to walk the entire way down to my normal stop.  I probably should have been wondering a little more what was going on, but if you've been around me when I first wake up, it's fairly impressive that I noticed the police car.

I crossed the road, keeping an eye on traffic and the pulled over cars and the cop, and headed to the shelter to wait for my bus.  Same as I would without all the drama.

And then I noticed (this realization totally took longer than it should have; see my above note about my mental functioning shortly after waking up.  If you've seen the movie Wall-E, I am basically exactly like him) that the shelter looked a little... odd. 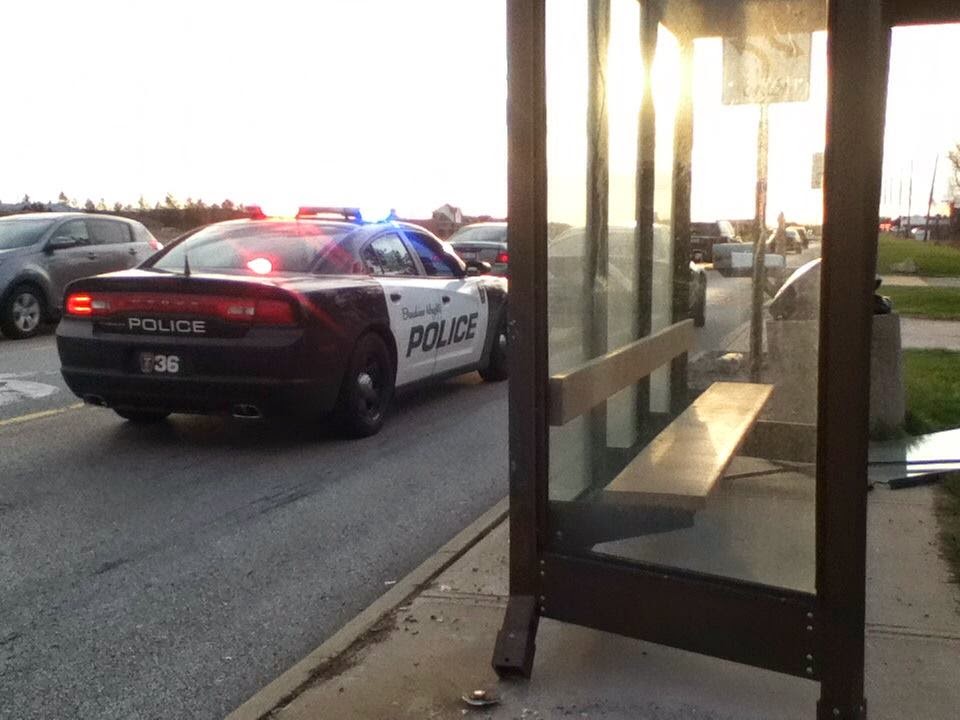 For one thing, it wasn't sitting on its foundations.

For another, one of the huge glass panes/walls had been knocked out and was laying on the ground.

The huge industrial urban garbage can next the shelter had been knocked out of its normal spot and was cracked.  I'm not sure what they're made out of, but they look like cement and rocks, and I'd never considered one of them being broken before.

I did a double take, stepped away from the shelter, and looked at the police car and the other car that was still pulled over.

I wasn't in that shelter when the car hit it, I realized, simultaneously shaken and exuberant.

And so that is my story.  Nothing spectacular aside from all the drama that I missed.

Yet the fact that I missed it is more than sufficiently spectacular for me.

Tonight, I'm thinking about the Westminster Shorter Catechism's answer to the eleventh question and Psalm 91.

He who dwells in the shelter of the Most High
will abide in the shadow of the Almighty.
I will say to the Lord, “My refuge and my fortress,
my God, in whom I trust.”
For he will deliver you from the snare of the fowler
and from the deadly pestilence.
He will cover you with his pinions,
and under his wings you will find refuge;
his faithfulness is a shield and buckler.

You will not fear the terror of the night,
nor the arrow that flies by day,
nor the pestilence that stalks in darkness,
nor the destruction that wastes at noonday.
A thousand may fall at your side,
ten thousand at your right hand,
but it will not come near you.
You will only look with your eyes
and see the recompense of the wicked.
Because you have made the Lord your dwelling place—
the Most High, who is my refuge—
no evil shall be allowed to befall you,
no plague come near your tent.
For he will command his angels concerning you
to guard you in all your ways.
On their hands they will bear you up,
lest you strike your foot against a stone.
You will tread on the lion and the adder;
the young lion and the serpent you will trample underfoot.
“Because he holds fast to me in love, I will deliver him;
I will protect him, because he knows my name.
When he calls to me, I will answer him;
I will be with him in trouble;
I will rescue him and honor him.
With long life I will satisfy him
and show him my salvation.”